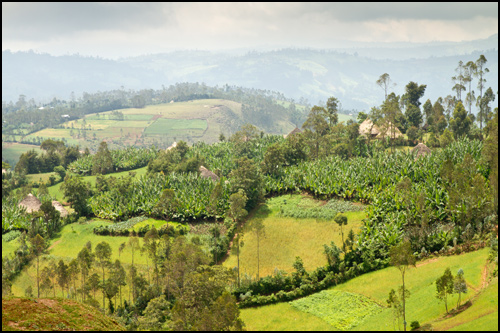 Our small group hit the road this morning in two four wheel drives.  Our destination for the day was Arba Minch, a university town surrounded by lakes.  With Hassan and Warade behind their respective wheels, we headed south into an unexpected patchwork landscape.

Like most of us, the idea of Ethiopia I held before travelling here was formed during the mid-eighties when images of drought, dust, and swollen-bellied, starving children filled our TV screens nightly.

I was surprised and delighted to find a country of proud, welcoming people, living amongst varied and beautiful landscapes.  Yes, some areas were dry and dusty, but there were also plenty of rolling hills covered with banana trees and terraced with crops, and areas dense with green jungle. 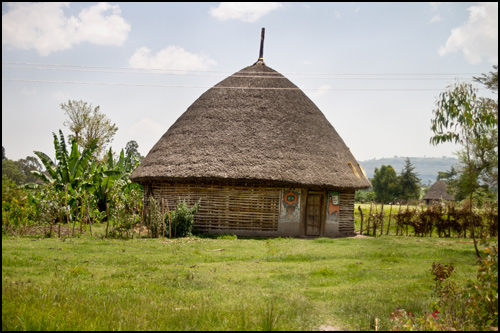 There wasn’t a lot of traffic along the newly built road.  Transport was mostly by foot, and everywhere along the road people were walking – to market, to school, on their way to visit friends and do their daily chores.  Zebra crossings were freshly painted at regular intervals, though they went unused.  For the occasional cars and trucks that passed through there were some road signs to warn of the pedestrian obstacles ahead.  I couldn’t help but giggle at the signs which showed figures with suitcases in hand fleeing as if from a tidal wave.

Just outside of Arba Minch we stopped at a small village on Lake Abaya that had been receiving a lot of local media attention in recent weeks.  When the lakeside villagers awoke one morning they found that a reed island complete with trees, monkeys and birdlife had floated up to their shore.  A multitude of enquiries into the islands origin came up with no answers.  Nowhere on any other part of the lake was anyone missing a chunk of land.  The enterprising villagers were making a few birr by showing visitors their ‘Mysterious Monkey Island’.  By the time we visited the monkeys had wisely scampered to the dry mainland, leaving not much to look at. 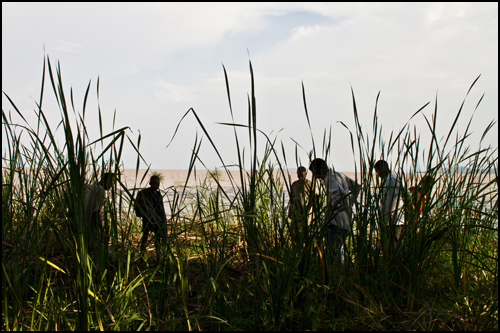