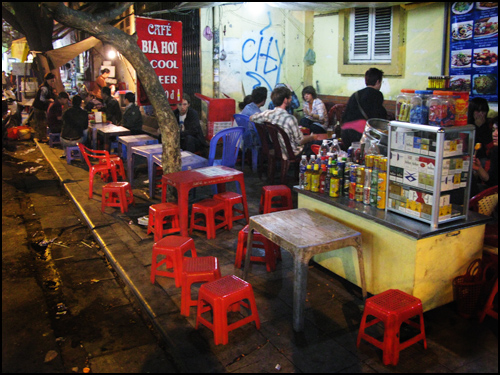 Back in Hanoi for our last day in Vietnam, it was time to make the most of Vietnam’s delicious food.  Brendan and I decided to try a street-side place that looked popular with the locals.  We found a couple of spare plastic stools and as we squatted to sit the owner, a chubby older woman with greying hair and an efficient but not unfriendly look on her face, caught my eye and held up two fingers.  I gave her a nod.  I had just ordered two of something.  Minutes later two bowls of steaming chicken noodle soup (pho) had arrived.  Next, another bowl was offered and with a second nod we had a selection of fresh herbs to season our soup with.  Any bones or used serviettes were simply dropped on the ground to be swept up later.  At 30000 dong ($1.50) a bowl, it was a cheap but delicious lunch.  I’ve just got to learn how to eat sitting so low without dropping noodles on my knees!