I woke up to a beautiful sunrise feeling refreshed after a good night sleep.  The campground was ours alone, only shared with a few hungry mosquitoes. 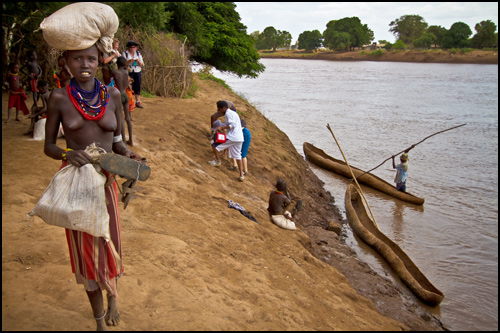 This morning we followed the road almost all the way to the Sudan border, to the small, dusty settlement of Omorate.  Once there, we walked down to the edge of the Omo River where log canoes waited to carry us across to the Dhasenech tribe on the opposite bank.  Clambering down the muddy bank wasn’t easy, and as I was stepping into the canoe I lost my footing and very nearly took a swim in the river.

The village, with huts covered with tree bark was layered in the dust that was being whipped up by a wind that had risen.  It gave the village a dejected atmosphere.  The people however were welcoming.  Many of them went about their daily chores, unfazed by the presence of six tourists, allowing us a rare insight into their way of life.  There were many weathered faces in the tribe.  The women wore long skirts made from the leather of cattle.  Often their heads were topped with decorated headdresses giving them an air of nobility.  After photographing one such woman, she reached out and held my face while blowing into it.  I’m told it was a Dhasenech blessing.

A beer back at camp helped to wash away some of the dust.  As we waited for the air to cool and the sun to drop, I chatted with guide Baty about the unexpected twists that life sometimes throws.  He had finished university a few years previously.  He had studied mechanical engineering, which he loved, wanted to work in, but way waylaid by his work as a tour guide.  He could earn a lot more money as an untrained English-speaking tour guide, and enjoyed meeting people from around the world, so would stick with it for now, maybe one day opening his own business.

Once the temperature had suitably dropped we went for a stroll to meet our neighbours – a Hamer family, who were preparing for the following days coming-of-age bull-jumping festival for their son.  Amongst the huts mothers were doing their daughters hair, covering twisted braids with a mixture of ochre and butter.  Yards were being swept, and gourds were filled with an interesting smelling home-brew.  We were invited to join the coming day’s festivities.  The invitation was heartily accepted.  I’m truly looking forward to it. 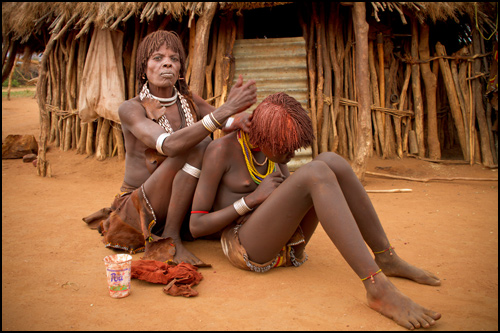 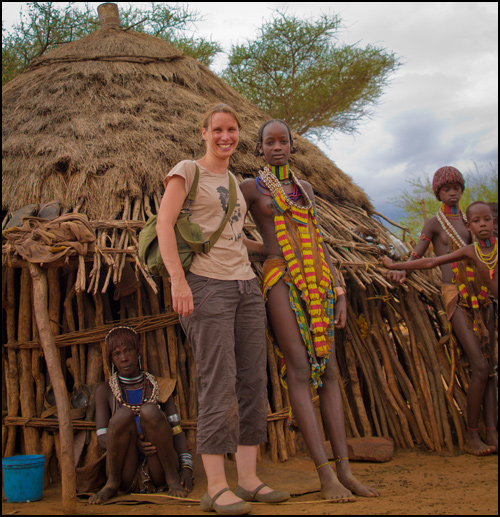 Arriving back at the tents, we found we had yet more neighbours.  A group of Spanish tourist’s tents had been set up right behind our own.  We were set up under the biggest shadiest trees, so I do understand why their tents were put so close, but with the rest of the camp ground being empty; it was a little annoying…particularly when the snoring started!